In Saratoga, weddings take on a special flair. From elegant to eclectic, Saratoga has a location you’ll love.

Here are just a few: Opened in 1935 by the state on the grounds of the New York State Reservation at Saratoga Springs – now known as the Saratoga Spa State Park – the Gideon Putnam Hotel was designed to be elegant without being overly ornate. The hotel was named in honor of one of Saratoga’s earliest settlers and the founder of the city’s first hotel. Dorothy Tuckerman Draper, interior designer of the Greenbrier Resort, decorated the Colonial Revival/ Neo-Georgian style hotel. Famed artist, James Reynolds, created the Adirondack and Saratoga themed murals in the dining room. The hotel has undergone a series of expansions and renovations, all while maintaining the original charm.

The Hall of Springs, also in the Saratoga Spa State Park, is another acclaimed wedding setting. With its high vaulted ceilings, marble floors and columns, Belgian crystal chandeliers and stone figures cut by Austrian stonecutters, it exudes grand elegance. It began as a hall where patrons could take a leisurely stroll or listen to orchestral music while sipping different mineral waters. When the era of mineral waters as a curative ended, the Hall of Springs became a place of elegant events, weddings and parties. 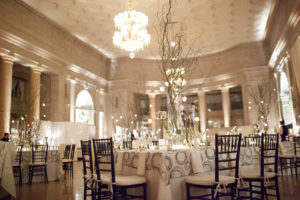 Another historic and popular venue is the Canfield Casino located in Congress Park. Opened as the Saratoga Horse Club in 1867 by John Morrissey (immortalized in Herbert Ashbury’s 1928 book, “The Gangs of New York”) the Casino soon became one of the world’s most renowned gambling establishments.

Richard Canfield purchased the building and grounds in 1884, turning the casino and the park into an attraction for the end of the century’s glamorous and wealthy. The Canfield Casino and the surrounding park, now owned by the city of Saratoga Springs, host some of Saratoga’s most elaborate parties, weddings and events.

“We chose the Canfield Casino because we felt as soon as we walked in that it had an ‘old Hollywood vibe’ to it that would tie everything in to our wedding. The decor in The Parlor with the large wooden chandeliers and the long bar was the perfect setting for the ceremony and the cocktail hour. [We felt] the Casino would envelope us in a rich Saratogian history.” —Amanda Gabbard, who married at the Canfield Casino 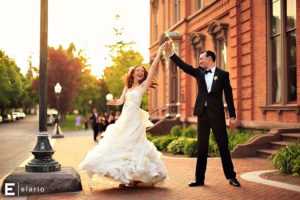 Not all Saratoga wedding venues are about extravagance and elegance. Among the many picturesque and historic locales that cater to those who want something intimate yet distinguished are the Batcheller Mansion, an 1873 Victorian inn that combines French Renaissance Revival, Italianate and Egyptian influences, and the Inn at Saratoga, the oldest continuous running inn in Saratoga. It has a Victorian ambiance with updated amenities to ensure romantic and carefree weddings. For the ultimate in intimacy and charm, Anne’s Washington Inn is hard to beat. Located near the Spa State Park, its 4+ acres offers a sense of privacy and its size offers the comfort of an elegant bed & breakfast.

Even the area’s more modern hotels have facilities capable of a once-in-a-lifetime wedding often with a range of amenities better suited for a diverse group. They all exude a classic elegance while retaining a sense of intimacy. You’ll love the choices that Saratoga offers!