The New York Racing Association, Inc. will continue its tradition of premium giveaways with four giveaway days scheduled for the summer 2016 meet at Saratoga Race Course. All giveaways are free with paid admission, while supplies last.

The 2016 Saratoga Race Course premium giveaway schedule is as follows:

The first giveaway of the 2016 season will pay tribute to the millinery theme of opening weekend when racing fans gather to receive a Saratoga baseball cap, presented by Saratoga Casino Hotel.

Racing fans will take home the second giveaway of the 2016 meet, a Saratoga duffle bag, presented by Foxwoods Resort Casino. 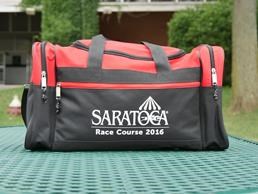 The season's penultimate premium giveaway is a Saratoga beach towel, which will enable racing fans to dream about a day at the Spa while lounging by the pool or spending time at the shore.

Perfect for the ensuing fall weather, the Saratoga long-sleeve pullover will serve as the final giveaway of the 2016 season, presented by Coca-Cola.

Season pass and season ticket plan holders will for the first time be guaranteed a Saratoga premium giveaway item. The pass holder must be in attendance on the day of the giveaway at Saratoga Race Course and redeem the item by 3 p.m. Redemptions will begin when gates open to the general public.