Second-Tier Cities Are More Vital Than Ever 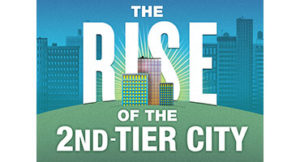 Second- and third-tier cities are expanding their offerings for groups

It's hardly a surprise to see destinations such as Orlando or Chicago rank high on lists of top meetings destinations every year, but Kissimmee, FL, and Indianapolis? This year those two cities ranked right up there with the largest cities on Cvent's list of the Top 50 Meeting Destinations in the United States.

"Although the top 10 remain fairly consistent on the list, there are some up-and-comers that always surprise," says Kevin Fleiss, vice president of marketing for Cvent's Hospitality Cloud, in Tysons Corner, VA.

"Second- and third-tier cities really want your business. They welcome groups with open arms," says Sean Connolly, meeting and event manager for GE Global Research, based in Niskayuna, NY. One of 10 GE research centers, this New York facility employs over 2,000.

Connolly, who has organized meetings in first-tier cities like New York and Boston, also frequently brings groups to destinations including Saratoga Springs, NY. "From hotels to food and A/V, it is much more cost-effective. In New York and Boston, the cost of a hotel room alone can be double."

Smaller cities are coming on strong as meeting destinations thanks to their affordability, good air connectivity, modern meeting facilities, and an extra level of service. And Connolly's company isn't the only one that is taking notice. Here are four reasons a lot of organizations are giving second-tier cities a second look........

Todd Garofano, president of the Saratoga Convention and Tourism Bureau, agrees that security is top of mind today. "We find that Saratoga is alluring to many board meetings of high-profile companies and other organizations because of how well our hotels, meeting venues, attractions, and amenities are situated," he says.

Downtown Saratoga brims with restaurants, cafes, and shops, and Connolly's groups walk from the City Center, the site of his meetings, to their hotels and other functions. "Saratoga is very attractive. There is a vibrant downtown with lots of activities to choose from," explains Connolly.

The affordability of second- and third-tier cities also makes them appealing to companies looking to play it safe with their meetings budgets. Not only are meeting facilities and accommodations more reasonable in most cases but tax rates are usually lower as well. For a recent meeting Connolly planned for 280, attendees could take in a polo match; go to the historic Saratoga Race Course, or visit the Saratoga Performing Arts Center -- all within walking distance of the host hotel. "Not having to hire ground transportation saved money from our budget and time from our agenda," says Connolly.