The Good Life - One of the many Walking Tours in Saratoga

Today, Saratoga's architecture is both a gorgeous mix of days-gone-bye as well as a bold new face of contemporary structures. On any Sunday morning, starting promptly at 10:30, you can take a walking tour through many sections of the city, learning about the rich and famous who walked the streets of yesteryear and lived under the roof of mansions that were ' Summertime cottages ' to the elite.

Narrated by members of the Saratoga Springs Preservation Foundation, you can learn about the architects who dreamt up these marvelous designs, as you stroll from house to house. Listening to the terrible tragedies that befell many of these wealthy families, even as they lived in such luxury, reminds one of the truth that money can't buy everything. 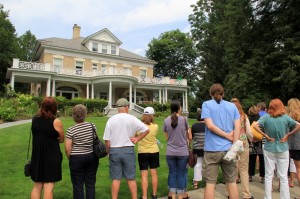 Today's walk started at the corner of Van Dam and Broadway. It was the first strolling tour I had ever been on, though I have passed the homes many times on an afternoon walk with my camera.. It was interesting to stand with other sightseers and gawk at the beauty of old stone and brick,colorful gardens and wrap-around porches. The tour was titled ' The Good Life ' and we could certainly see why. The homes are exquisite. They were built by the best.

The most prominent citizens helped make Saratoga the city people came to from all over the country. In 1903, Lucy Skidmore Scribner created "The Young Women's Industrial Club" with money that was left to her by both her husband and father after their untimely passing. In 1911, the club was renamed the "Skidmore School of Arts"  working exclusively to train young women in one of 60 areas of study. In 1922, the school was renamed "Skidmore College" still an all woman's college. It was not until 1971 that Skidmore College became co-educational. Lucy Skidmore Scribner died on May 2, 1931 and was laid to rest near her much beloved husband.

Henry Hathorn worked in the merchantile industry. He discovered one of the 17 Mineral Springs in the city, later named Hathorn Springs and one of the most coveted by visitors and residents alike for it's medicinal qualities. Today large quantities of the Hathorn Springs water is bottled and sold throughout the United States and Canada. Hathorn also served as Sheriff of Saratoga County, was Supervisor of the city for a period of time, as well as a US Representative. 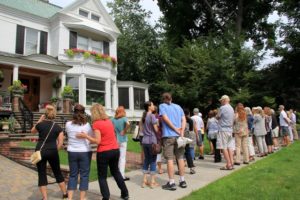 Senator Brackett also contributed to the grand residences of this neighborhood. He practiced law in the city of Saratoga Springs and founded The Adirondack trust bank. He also helped found the golf course, McGregor Links, which is believed to be one of the best in the country.

There were many others who helped make the city what it is today, but these few entranced me as I listened to the narrator.

Broadway's homes still have the 'feel' of the past around them. Architectural styles are varied. Some of the homes here are Greek Revival, Late Victorian, Queen Anne and Italianate style. Each one is beautiful in it's own way and I could appreciate the glory of those days when they were first built and lived in, as we walked slowly past under shade trees on both sides of the street.

More than one of the many homes we strolled by were used in the filming of ' Ghost Story ' - starring Fred Astaire - one of my all time favorite actors. When I got home this afternoon, you can believe I looked it up on YouTube. 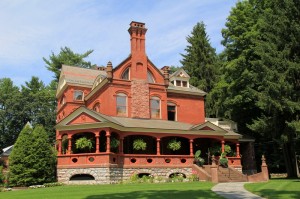 Today there is a ' review process ' for all homes and structures in any Historic District found within  the city limits. Desired changes need to go through this intense process, as it helps ensure the preservation of architectural character while allowing flexibility to owners in some areas of change. Several grants have been approved for façade improvement from the City Of Saratoga Springs.

Spending 90 minutes on any given Sunday is well worth the time - learning about a little piece of beauty in the Spa City that we call 'home' - stays with you long afterwards.

1: Post-time Stroll 2: Pups for Preservation Stroll 3: Down in the Valley: Exploring The Gut Stroll

These are just a few of the upcoming Sunday walks. More information can be found on the website.