There’s a MAP for That! 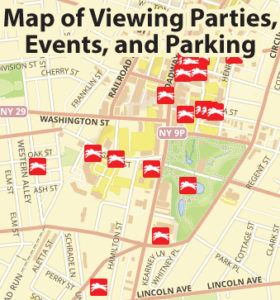 With tickets to the Travers Stakes at the Saratoga Racecourse sold out, dozens of “Viewing Parties” are organizing around Saratoga, promising a city-wide festival of great proportions.  And, because we know you need it, “there’s a MAP for that!”

Saratoga Springs offers excitement and delight around every corner.  An old city with tons of history, Saratoga Springs is steeped not only in the high-octane excitement of the track, but the impromptu and ever-changing offerings happening on the street-corner, in the parks, in the shops and restaurants, and down the alley.

The Saratoga Convention and Tourism Bureau’s online dynamic map, created  by JIMAPCO, Inc., of Round Lake, NY, is your essential companion on an outing to Saratoga.  A highly tailored mobile map for phones and tablets, the map reflect Saratoga’s unique nature and incredible depth, offering “layers” of information that can be viewed by subject (i.e. Travers Day Events”), or in groupings (i.e., Restaurants and Shopping) so the user can see relationships.  The map shows where the  action will be, as well as where everything else is,  including businesses, landmarks, parking, and other resources.

“These highly specialized maps are exactly what the Saratoga visitor needs”, said Paul Hein, JIMAPCO’s Production Manager.  “They work on your phone, tablet, or computer.  The information is dynamic; we can update it as needed and it’s visible immediately.”

The Interactive Maps can be accessed through the Saratoga Convention and Tourism Bureau’s website at http://discoversaratoga.org/saratogatravers2015