SARATOGA SPRINGS, N.Y. – On June 3rd, the Saratoga Convention and Tourism Bureau (SCTB) entered into a two and a half year agreement with the City of Saratoga Springs to manage the operations and programs of the Saratoga Heritage Area Visitor Center, located at 297 Broadway. The official open house is October 14 from 10 AM – 7 PM.

The Open House will provide the public a chance to see how visitors to our destination are greeted and highlight the services and programs currently provided at the Visitor Center. Abbreviated walking tours of Congress Park will be provided and Betsy and the Bygones, a popular mainstay at the Summer Concert Series, will perform from 5:30 PM – 7 PM. Locally produced food & beverage samples will be provided throughout the day.

“This opportunity to manage the programs and operations at the Visitor Center provides the SCTB another resource to market all Saratoga has to offer to the groups, conventions and visitors that frequent Saratoga County”, said Todd Garofano, President of the SCTB. Heather McElhiney has relocated from the Bureau’s office to the Visitor Center to be the full-time Director there. Heather encourages everyone to stop in and say hello.

In the short time since taking over the operations there, the Convention & Tourism Bureau has added a full-time Assistant Director and an additional part-time staff person, created a free Wi-Fi hotspot which extends onto the front lawn and into the beautiful courtyard area, added an interactive welcome kiosk, extended the popular walking tours through the fall and expanded the marketing reach for the free summer concert series in Congress Park. 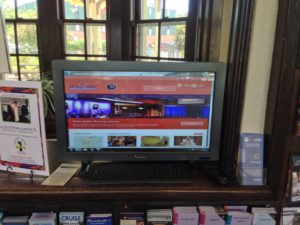 Stay tuned for announcements of additional activities, initiatives and changes to make the visitors to our region feel more welcome!

For information on how to schedule or plan a meeting, conference, wedding or sport/special event in Saratoga, visit the Saratoga Convention and Tourism Bureau’s website at www.discoversaratoga.org.